Anomalous absorption takes place when radiation is dynamically diffracted by a perfect or nearly perfect crystal. The optical field in the crystal is then made up of several components, called wavefields, two in the two-beam case (neglecting polarization in the X-ray case). One of them is absorbed more than normal and the other one less than normal. In the transmission, or Laue, geometry, both wavefields propagate inside the crystal; one then speaks of anomalous transmission for the less absorbed wavefield (Borrmann effect). In the reflection, or Bragg, geometry, one wavefield only propagates in the crystal, the more absorbed one for angles of incidence corresponding to one side of the total reflection rocking curve and the less absorbed one for the other side. This results in an asymmetry of the rocking curve that is calculated using dynamical theory. 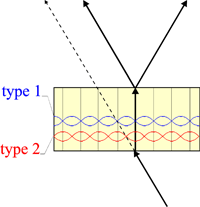